Alternating tread stairs, ships ladders, and ship stairs are all steep angled stair devices used in space-restricted applications. How do these devices differ from each other? OSHA and IBC define and set standards for the different designs of steep stairways. This guide will help you understand the different designs and code standards, and help you make the right decision in choosing the safest, code-compliant option.

Ship stair (ship ladder) means a stairway that is equipped with treads, stair rails, and open risers, and has a slope that is between 50 and 70 degrees from the horizontal.

Alternating tread-type stair means a type of stairway consisting of a series of treads that usually are attached to a center support in an alternating manner such that an employee typically does not have both feet on the same level while using the stairway.

Alternating tread stairs use a staggered step design to increase tread depth at steep angles to save space. This design allows for a safer, face-forward descent down the stair.

The video demonstrates the difference in walking down an alternating tread stair next to a steep stair. The increased tread depth gives the user a complete surface to rest each step. 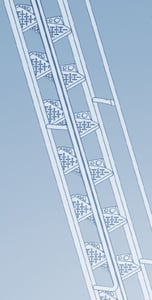 Alternating tread stairs are a type of ships ladder or ship stair device. They are used in applications with space constraints to save floor space. Typical applications for alternating tread stairs include conveyor and equipment access, work platforms, crossover stairs, and anywhere in a facility that does not have space for a standard stair design.

OSHA defines Alternating tread-type stair as a type of stairway consisting of a series of treads that usually are attached to a center support in an alternating manner such that an employee typically does not have both feet on the same level while using the stairway.

2018 International Building Code (IBC) defines an Alternating tread device as a device that has a series of steps between 50 and 70 degrees from horizontal, usually attached to a center support rail in an alternating manner so that the user does not have both feet on the same level at the same time.

OSHA set the design requirements for alternating tread stairs in section 1910.25(f) below:

The side mounted handrails also act as the guardrail fall protection for the device. Because they have an integrated side-mounted hand / guardrail, alternating tread stairs do not need to be used with fall arrest systems.

OSHA also sets standards for how an alternating tread stair can be used by employers.

Usually, alternating tread stairs or ship stairs are used when there are space restrictions that make it not feasible to provide standard stairs.

Because alternating tread stairs have a full usable tread surface for each foot, the stairs are designed to be descended face-forward like a standard stair. They are not subject to the requirements of OSHA 1910.23 Ladders for facing the ladder (backing down the ladder) while climbing. The face-forward descent allows users to see in the direction of travel and more easily carry tools or items while descending.

IBC design requirements for an alternating tread device are found in section 1011.14.2:

IBC also has strict requirements for how alternating tread stairs can be used as a means of egress.

So for unoccupied roofs, a ladder or alternating tread stair extending through a roof hatch is the most common method of accessing the roof.

Ships ladders are steep angled stair devices with angles between 50 and 70 degrees. This is much steeper than the typical angle of stairs of 45 degrees per OSHA and 30-32 degrees per IBC. Because they are so steep, ships ladders have much less usable tread depth than a standard OSHA or IBC stair design.

What are ship ladders?

"A stair that is equipped with treads, stair rails, and open risers, and has a slope that is between 50 and 70 degrees from the horizontal."

In essence, a ship stair is just a very steep stair. This image below from OSHA 1910.25 - Stairways  shows two ship stairs at different angles. 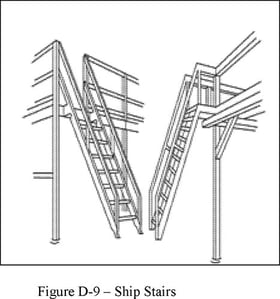 OSHA provides the ship ladder standards in section 1910.25(e) below:

OSHA also defines angles for each type of stairway and ladder. Here is a chart comparing the angles of all the different types of stairs.

Like the alternating tread stair, OSHA 1910.28 also requires that ship stairs have handrails:

The side mounted handrails also act as the guardrail fall protection for the device. Because they have an integrated side-mounted hand / guardrail, ships ladders do not need to be used with fall arrest systems.

OSHA also sets standards for how ships ladders can be used by employers.

Since ships ladders have very narrow tread surface, they must typically be descended backwards like a vertical ladder. When backing down a ladder, OSHA requires that users use at least one hand for grasping and do not carry tools or items that can cause loss of balance.

Ships ladders shall have a minimum tread depth of 5 inches (127mm). The tread shall be projected such that the total of the tread depth plus the nosing projection is not less than 8 1/2 inches (216mm). The maximum riser height shall be 9 ½ inches (241 mm).

IBC also sets strict standards for how ships ladders can be used as a means of egress.

IBC section 1011.15 Ship Ladders states that ships ladders are permitted to be used in Group I-3 as a component of a means of egress to and from control rooms or elevated facility observation station not more than 250 square feet with not more than three occupants and for access to unoccupied roofs.

What are ship stairs?

What is the difference between a ship stair and a ship ladder?

A key difference between a stair and a ladder is the way in which they are used. OSHA 1910.23 states the following requirements on employees using ladders.

1910.23(b)(13) No employee carries any object or load that could cause the employee to lose balance and fall while climbing up or down the ladder.

Ship stairs shallower than 60 degrees can be designed as face-forward descent devices. However, because these devices have much shorter tread depth, walking down face-forward is very difficult and potentially unsafe for the user. Users are left with a very small tread surface for each foot causing a fall hazard. You can see that in this photo below. 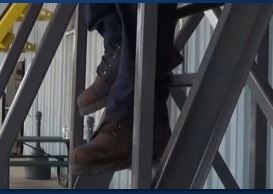 In many cases, backing down ship stairs is a safer alternative even though the user cannot see where they are going while backing down.

How ship stairs or ship ladders are designed to be descended is up to the designer or operator. Designers should consider that as stairs get steeper, tread depth shortens and becomes a major risk factor of stairway design. For standard ship stairs, a shallower angle is safer than a steep angle. Alternating tread stairs have the unused half of each tread removed to provide more tread depth at steeper angles.  These are all considerations that should be factored into your next design.

For more info, download our guide on stair design for safety and ergonomics.

Ship stairs & ladders: Which is the right choice for you?

When choosing between a standard stair, ship stair, or alternating tread stair, the most important consideration is safety. Which stair design is the safest?

It helps to understand the a few of the most important design induced safety factors of stairway design as outlined in Chapter 13 of Fall Protection and Prevention: Principles, Guidelines, and Practices.

Of these safety factors, adequate stair tread depth is the most variable between the different stair design.

Here is a table showing the minimum tread depth requirements for the different stair types.

From this chart, you can see that standard stairs have the most tread depth, followed by alternating tread stairs, followed by spiral stairs, then ship stairs.

How do we know that tread depth is an important safety factor and that alternating tread stairs are safer than ship stairs?

Many studies have demonstrated that narrow tread depth is a risk factor for stairways. A recent study measured the perceived difficulty in descent of stairways. This study, by Hisao Nagato, of the Ohara Memorial Institute for Science of Labor in Japan, looked at how difficult it was for users to descend stairways with varying tread depths. The result showed that stairs become increasingly difficult to descend as tread depth narrows. To measure the difficulty, the researchers used a metric called the Z-value, which increases as difficulty increases. Below is a chart showing the Z-values for different stair designs. Ship stairs were shown to have very high perceived difficulty while descending due to the short tread depth. 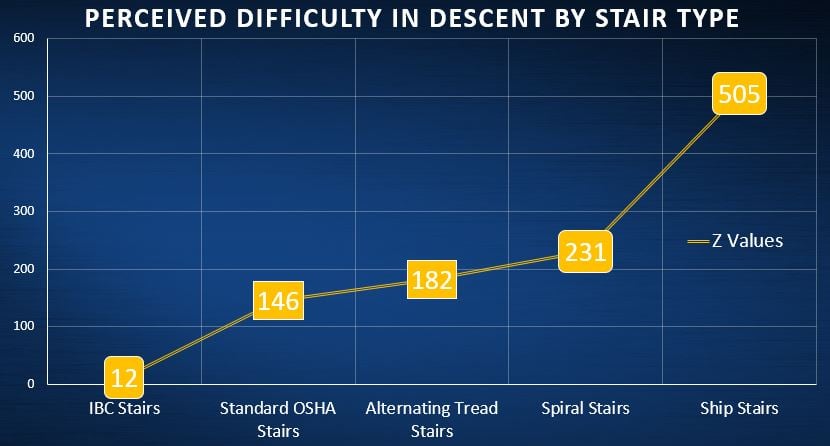 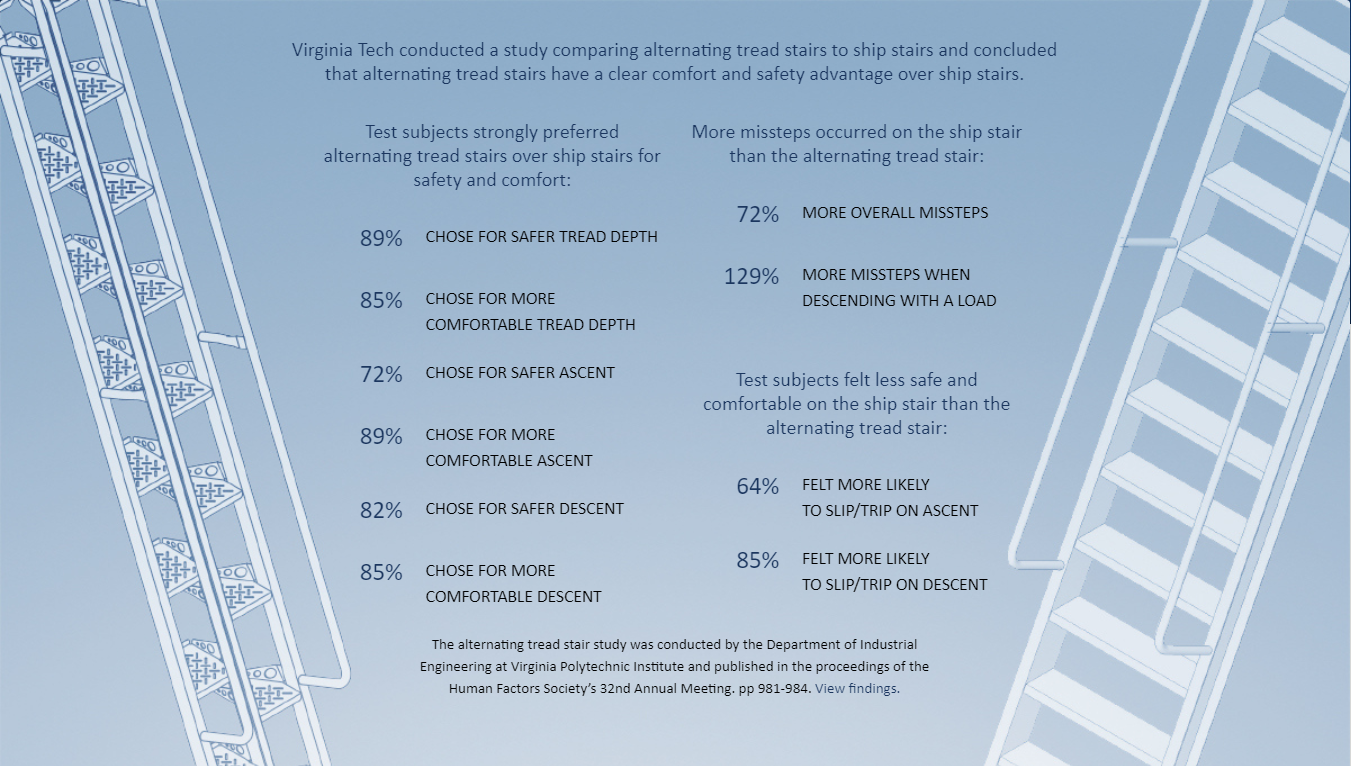 What angle is a ship ladder?

What is an alternating tread staircase?

Alternating tread stairs are legal to install and use in space-restricted areas under OSHA section 1910.25. Alternating tread-type stairs are used only when the employer can demonstrate that it is not feasible to provide standard stairs. 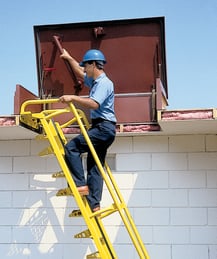