What Are The Parts Of A Staircase Called? (Stair Terminology & Diagrams) 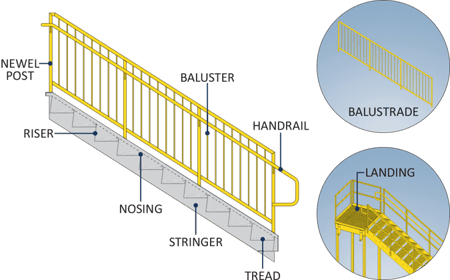 Staircases come in all different shapes and styles from simple, straight staircases to circular staircases designed to make a grand architectural statement.

Many types of materials are also used to build staircases - from traditional wood to more modern materials such as glass, tile and wire. Despite the number of design and material variations possible, the main parts of a staircase are fairly standard.

What are the parts of a staircase called? (diagram)

Most people are aware of some stair parts names such as the tread, riser, landing and handrail. But unless you are an architect or builder, you may not be familiar with staircase terminology such as baluster, stringer, volute, bullnose or newel post.

Even though there are different types of stairs, the parts are always the same. Below you will find a list of stair parts. We’ll define the stair parts terminology so you can talk stairs with even the most seasoned professional.

Tread: what is a tread?

A tread is the horizontal part of a staircase that extends from the front edge of the stair nosing to the riser. It serves as the walking surface of the stair that you step on when climbing up or down the stairs. Below are a few common tread types used for prefabricated industrial stairs and bolted access stairs. 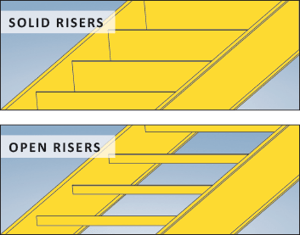 Riser: what is a riser?

A riser is the vertical part of the stair between each tread. Stairs with risers are called closed tread stairs. To give a staircase a more modern look, it can be built without risers. This open riser style provides the appearance of a larger space. 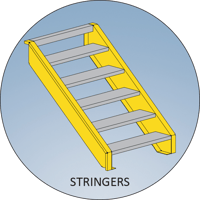 Stringer: what is a stringer? 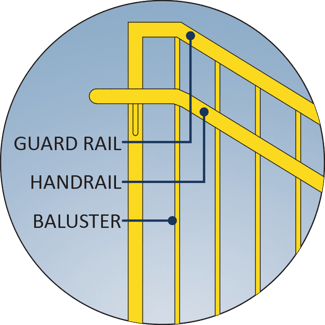 Handrail: what is a handrail?

A handrail, also called a bannister, is what people hold onto for support when going up and down the staircase. The handrail is fixed to vertical posts (balusters) or a wall up one or both sides of the staircase.

Guardrail: what is a guardrail?

A guardrail is a barrier system erected on an unprotected side of a stair that protects people from falling. The guardrail can be attached directly to the stringer or to the treads.

Baluster: what is a baluster?

A baluster is a the vertical post onto which the handrail is affixed. It is usually a part of the guardrail system. These pillars or columns are usually decorative in design and are also referred to as the spindle.

Balustrade: what is a balustrade? 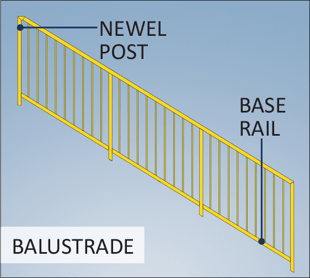 A balustrade is formed by a series of balusters which are evenly spaced and connected together to form a decorative guard on the side of the staircase.

A newel post is the heavy, vertical post at the end or turn of a handrail. As opposed to a baluster, a new post is a structural component of a staircase which is attached directly to the floor or to the end of the stringer.

Base rail: what is base rail?

The base rail is the board at the bottom of the guardrail that is located beneath the balusters and on top of the stringer. The base rail runs up the staircase and is supported at each end by a newel post. 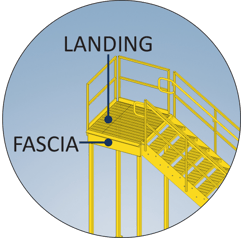 Landing: what is a landing?

The landing is the flat flooring at the top and bottom of a staircase that serves as a resting place and provides access to rooms. A landing can also be part of the staircase where it makes a turn.

Fascia: what is a fascia?

A fascia board is a non-structural vertical board which on the outside of the staircase or landing. It can be used as a covering for risers or to cover the gap between the floor of a balcony and the ceiling below.

Curtail: what is a curtail?

Bullnose: what is a bullnose?

A bullnose is another type of feature step at the bottom of the stairs. Like a curtail, it is also wider than the other steps and rounded. However, the bullnose stops at the front edge of the newel post and has a much smaller radius than a curtail.

Nosing: what is nosing?

Nosing is the front of the tread which protrudes beyond the riser. Because this is where most of the foot traffic occurs, anti-slip strips may be applied to the nosing at the edge of the tread to make navigating the stairs easier.

Winders: what are winders?

Winders are pie-shaped or triangular steps used to make a turn. Instead of a flat landing, the stairway is continuous with winders being used to create the change in direction.

Gooseneck: what is a gooseneck?

Volute: what is a volute? 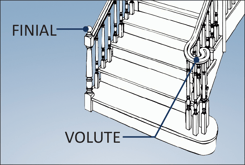 A volute is the spiral at the bottom part of the handrail used with curtail or bullnose steps. This detail looks like a scroll at the end of the handrail and is also referred to as a monkey’s tail.

Finial: what is a finial?

A finial is a decorative piece at the top of a newel post. Finials are commonly found made of wood in the shape of a ball but can also be quite ornate and made of glass or metal.

No matter the style of staircase or the material used, the parts of the staircase are normally the same. Hopefully, we’ve made even less frequently used stair parts terminology easy to understand. And the next time you go up or down a grand staircase, you’ll be sure to notice the curtail and volute. 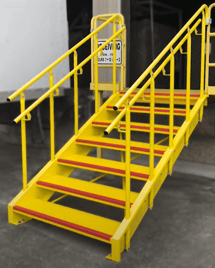 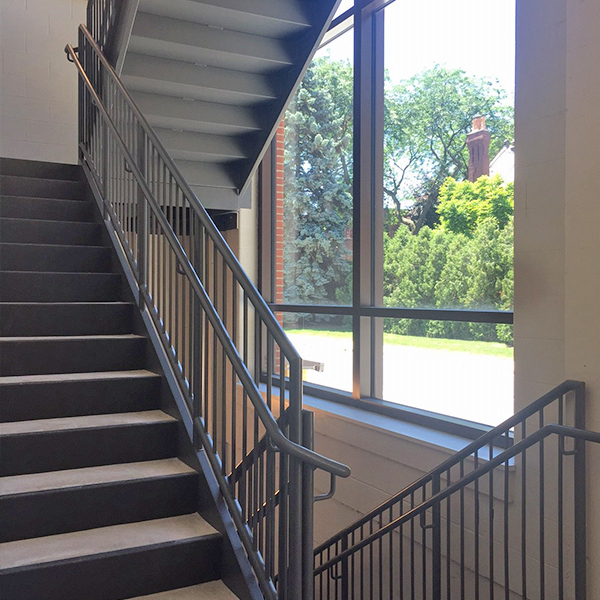