Means Of Egress Definition In Construction (with Examples)

Means of egress definition in construction 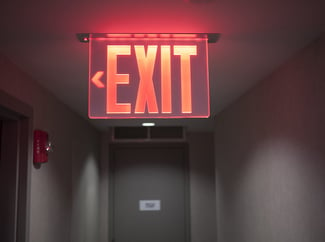 The means of egress definition in construction is the same as for any building occupancy. A means of egress is a continuous and unobstructed path of vertical and horizontal egress travel from any occupied portion of a building to a public way, such as a street or parcel of land.

OSHA section 1926.34 defines the requirements for means of egress in construction.

1926.34(a) In every building or structure exits shall be so arranged and maintained as to provide free and unobstructed egress from all parts of the building or structure at all times when it is occupied. No lock or fastening to prevent free escape from the inside of any building shall be installed except in mental, penal, or corrective institutions where supervisory personnel is continually on duty and effective provisions are made to remove occupants in case of fire or other emergency.

1926.34(c) The means of egress shall be continually maintained free of all obstructions or impediments to full instant use in the case of fire or other emergency.

Design requirements for a means of egress are established according to IBC chapter 10. This chapter defines the requirements for the number of exits, the width of exit stairways, exit signs, travel distance, and other important design factors to ensure a safe egress system.

Means of egress diagrams can help better understand how the egress system is used and how each part works together to form a safe exit route from the building in case of emergency. 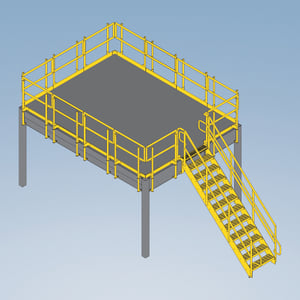 The mezzanine means of egress usually consists of a mezzanine stairway complying with the IBC code requirements for industrial stairs. 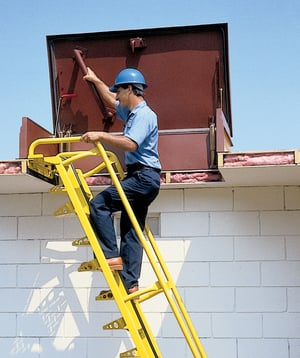 A means of egress from the roof must be provided to allow safe exit from the roof. The requirements for the means of egress depends on whether the roof is occupied or unoccupied. Occupied roofs must be provided with an egress stairway like any other occupied portion of the building. The unoccupied roof egress requirements allow an exception since the roof will not be occupied by the general public.

For unoccupied roofs, under the exception to IBC 1011.12, access to the roof from the top story is permitted to be by an alternating tread device, a ships ladder, or a permanent ladder. 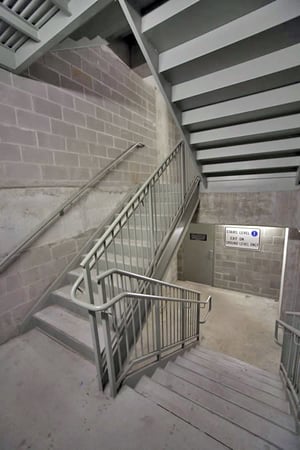 The commercial egress requirements are established by the International Building Code (IBC), the National Fire Protection Agency Life Safety Code (NFPA), and the Americans with Disabilities Act (ADA). Your local building code will adopt one or more of these standard under the IBC and NFPA. The ADA requirements are federally enforced and all local building codes will need to comply.

The exit access is the portion that leads from the occupied are to the exit. This can be a hallway, passageway, or access door.

The exit is the portion between the exit access and the exit discharge. Examples of exits are exterior exit doors, interior egress stairs, ramps, exterior fire escape stairs, and horizontal exits. The number of exits required depends on the building occupant load or the number of occupants per unit of floor area within the building. 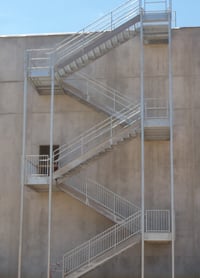 Exterior egress stair requirements are established by IBC in sections 1027 for exterior stairways.

What does means of egress mean?

Means of egress means the path of travel from any occupied portion of a building to a public way, such as a street or parcel of land. It is the emergency escape route in case of fire and includes the fire exits, stairs, and walkways used to exit the building.