Ergonomics of ladders and stairs

Both ladders and stairs can cause ergonomic stress and fall hazard for workers. Repetitive ladder climbing is associated with upper limb and back musculoskeletal injuries and stairways pose significant risk as well. Falls to a lower level cause 86% of fatal falls, many of them being from ladders and stairs.

But 22% of  fatal falls are falls from ladders while only 4% are falls from stairs. OSHA now requires personal fall arrest systems for ladders above 24 feet, but most fatal falls occur from ladders less than 20 feet in height. Why do ladders account for such a high percentage of falls? Understanding the ergonomics of ladders and stairs helps to better understand why and how falls can occur from these devices.

Types of ladders and stairs

Ergonomic factors depend on the design of the ladder or stair device. Below is a list of the different types of devices commonly found in the workplace.

A Fixed ladder is defined by OSHA 1910.21 as a ladder with rails or individual rungs that is permanently attached to a structure, building, or equipment. Fixed ladders include individual-rung ladders, but not ship stairs, step bolts, or manhole steps. Fixed ladders can be either vertical at a 90 degree slope or pitched at an angle up to a 60 degree slope.

A Ships ladder (ship stair) is defined by OSHA as a stairway that is equipped with treads, stair rails, and open risers, and has a slope that is between 50 and 70 degrees from the horizontal. Ship stairs have side-mounted handrails whereas fixed ladders do not.

An Alternating tread stair is defined by OSHA as a type of stairway consisting of a series of treads that usually are attached to a center support in an alternating manner such that an employee typically does not have both feet on the same level while using the stairway.

A Standard stair is defined as a fixed or permanently installed stairway. Stairways are fixed with stair rails and handrails on each side. 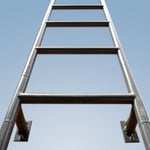 Biomechanics of ladder and stair use

Climbing a fixed vertical ladder involves a range of motion of both the upper and lower limbs. The upper limbs used in ladder climbing include the hands, wrists, forearm, upper arm, and shoulders. Climbing a ladder requires extending the arm, grasping the rungs with the hands, and flexing at the elbow. In the lower limbs, climbing requires the user to flex the ankle at an angle, flex the knees and hips, then extend the knee straight. 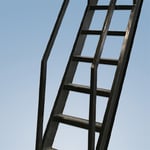 The biomechanics of ships ladders or ship stairs depends on whether the devices are designed to be device-facing descent or face-forward descent. Typically, steeper ships ladders must be device facing, with 3-point contact, similar to a fixed vertical ladder.

Ships ladders are angled up to 70 degree from vertical and contain separate side handrails on each side of the ladder. The user must hold the side rails while climbing rather than holding the ladder rungs. Climbing a ships ladder requires similar biomechanics as a fixed ladder. The user extends arm, grasps the side rails, and flexes at the elbow. In the lower limbs, climbing requires the user to flex the ankle at an angle, flex the knees and hips, then extend the knee straight. 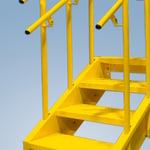 During stair ascent and descent, the lower limbs move in a cyclical pattern with two phases, the stance phase and the swing phase. During the stance phase, the user pulls his or her weight onto the stair tread, centers gravity over the tread, and then shifts weight in a forward direction. During the swing phase, the user brings the foot up and over the next step and places the foot on the tread above. In the lower limbs, the overall motion requires the user to flex the hip, knee, and ankle joints. In the upper limbs, the user may choose to grasp the handrail or keep the arms and hands free. 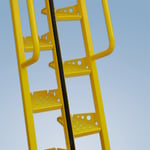 Ergonomics and risk factors of stair and ladder climbing

A user imposes 2 primary forces to maintain balance while climbing a ladder or stairway.

The excessive handgrip force required for ladder climbing  poses significant fall hazard and overexertion hazard on users of ladders. Loss of handgrip is a significant cause of falls from ladders and increased upper body strength is associated with reduction in fall severity from ladders.

Stairways allow use of the larger muscle groups in the lower limbs and allow the user to center gravity over the feet during the stance phase. The greater reliance on the lower body of a stairway reduces fatigue and fall hazard. For this reason, Lapeyre Stair and other safety experts recommend replacing ladders with stairways whenever possible.

One study indicated that climbing ladders with side rails was more strenuous than climbing ladders with rungs. Other studies have indicated that users need less handgrip force to maintain balance on a side-rail ladder vs a rung ladder and that the climber users more of the lower body in climbing a side-rail ladder.  Ladders with side rails also impose the need for lateral handgrip forces to maintain balance. Side rails allow users to place hands at the optimal position for comfort vs rung ladders which require users to reach to a fixed rung location.

Climbing with a toolbox

Climbing with a toolbox increases the use of hand force required to maintain balance on a ladder.  Additionally climbing down a ladder using side rails with a toolbox has been shown to be more difficult than climbing  a rung-style ladder. For environments requiring routine carrying of tools up and down, all ladders including side-rail ships ladder should be avoided. 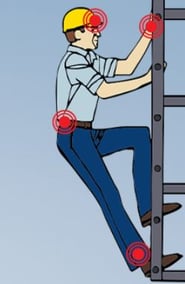 Musculoskeletal stresses of ladder and stair use

Climbing a ladder or stairway requires flexing of the user's joints to maintain the foot and hand forces for keeping balance. Climbing a vertical ladder demands greater effort and physiological response than climbing a pitched ladder or ships ladder. Speed of ladder climbing also contributes to increase of force on the lower back, up to 100% a user's static strength.

Ladders require high upper body joint moments in the elbow and shoulder. Vertical ladders may require up to 45% of a user's maximum muscle strength capability at the elbow. Angling a ladder reduces this elbow moment to a large extent.

Climbing both stairways and ladders come with risks. Understanding the ergonomic factors of climbing ladders and stairways can help employers make the right decision when choosing which device they install in their facility. Fixed ladders and angled ladders (ships ladders) place  greater stresses on users' upper body muscles during climbing than do stairways. This stress load can lead to overexertion, loss of handgrip, and increased risk of falls.