On its own, this is a great advantage. More tread depth means a larger stepping surface and greater stability for the user.

But how does this actually translate to improved safety and comfort?

A team at the Virginia Tech Human Factors Engineering Laboratory performed a study to answer just that!

The alternating tread design had recently been introduced as a space saving, safety stair for industrial use, and the research team wanted to know how it compared to more conventional ship's ladders in relation to ease of use, safety and comfort.

The research team recruited 80 undergraduate students to take part in the study. The study used a ship stair and an alternating tread stair, both 9' tall, mounted to a platform. Here's a plan view of the overall setup:

They then instructed the users to spend 10-15 minutes familiarizing themselves with both stair systems so that the subjects were comfortable with each stair before the trials began.

The subjects then ascended and descended the stair as rapidly as possible without compromising safety.

The researchers used various statistical techniques to analyze and understand the data. They then discussed and attempted to explain a few interesting findings.

First, they found that the subjects took about .5 seconds longer to travel up or down the alternating tread stair compared to the ship stair.

The researchers reasoned that the small difference is not surprising since most of the subjects had years of experience traveling the ship stair but only a few minutes traveling the alternating tread stair.

They also noticed that the subjects were forced to travel faster down the ship stair because it causes the body to lean forward.

Their findings then showed a measure of 22 missteps on the alternating tread stair vs 38 on the ship stair.

Here is a table of the missteps under different conditions: 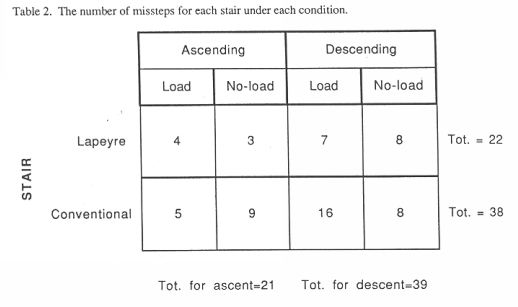 The alternating tread stair had fewer or equal missteps under all conditions, but especially when descending the stair with a load and ascending without a load.

The safety questionnaire asked the subjects to rate each stair type based on their perception of safety and likelihood of slipping or tripping in ascending and descending the stairs.

The comfort questionnaire asked subjects how they perceived the overall comfort of the stair and the comfort of attributes like tread width, tread depth, and riser height in ascending and descending the stairs.

Out of a total of 30 questions, 14 showed a significant difference in how the stairs were perceived by the user. The participants rated the alternating tread stairs higher for both safety and comfort during descent.

They rated the ship ladder as having a higher likelihood of foot slippage or tripping during ascent and descent.

The participants felt particularly strongly that there was a much higher likelihood of slippage during descent of the ship ladder vs the alternating tread stair.

Overall, the researchers concluded that the results of both the objective and subjective measures suggest the alternating tread stair is safer and more comfortable than the conventional ship stair.

The researchers reasoned that the small increase in travel time was likely due to lack of experience with the alternating tread stair design and would likely diminish to zero with modest experience.

Ergonomics of ladders and stairs

Both ladders and stairs can cause ergonomic stress and fall hazard for workers. Repetitive ladder...